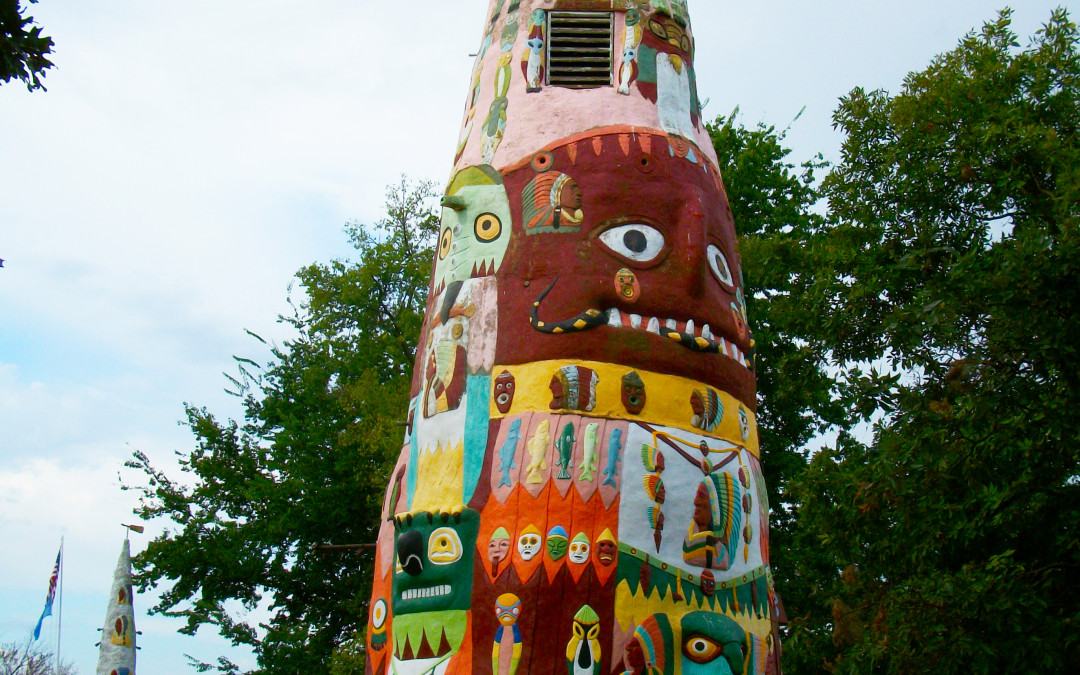 The World’s Largest Totem Pole would get a lot more eyeballing if it was along historic Route 66. That revered flypaper strip is scant miles away, but most Rt. 66-ophants are unaware of this impressive folk art attraction as they dutifully check off snapshots of the Blue Whale in Catoosa on their way to the Googie motel neon in Tucumcari, New Mexico.

This one is worth a detour.

Ed Galloway (1880-1962) was born in Missouri, fought in the Spanish-American War, and was on his way with his family to California when he took a temporary job in Foyil. He spent over 20 years teaching boys woodworking in the Children Home orphanage in Sand Springs, OK, and retired to property he purchased in Foyil in 1937. Working mostly by himself, Galloway started the Totem Pole in 1937 and finished in 1948. Though sometimes credited as a monument to Native American tribes, Galloway said he built it after he retired so he would simply have something to do. He thought it would be a good thing for youngsters, Boy Scouts in particular, to visit.

The totem pole is constructed of concrete over a scrap metal and sandstone rock skeleton. Sixty feet tall, six stories, 30 feet in circumference, the pole rests on the back of a turtle. Sculpted and brightly painted renditions of spirit lizards, owls, and headressed Indian chiefs climb to the pinnacle.

A doorway to the inner chamber is locked; inside is a ladder that climbs through four stories of circular and increasingly narrow chambers.

Ed built other sculptures on his property, though none as big as the Totem Pole. An Indian arrowhead sticks up out of the ground; stylized birds and smaller totem poles are spread across Totem Pole Park.

Ed’s wife once taunted him with her own variation of Joyce Kilmer’s poem Trees: “Totem poles are made by fools like thee, but only God can make a tree.” Galloway promptly crafted a 12-ft. concrete tree trunk, with holes for birds to live in.

Ed built the Fiddle House to show off his handmade fiddles. It is supported inside and out by 25 concrete Totem Poles. At one time, it contained Ed’s handmade furniture, and bas-relief portraits of all US Presidents up to JFK.

He worked every day on his creations, up at 5 a.m. and continuing past sunset right up until his death of cancer in 1962. In the decades following Galloway’s death, all the sculptures began to deteriorate from weather and neglect. The bulk of the pieces in the Fiddle House were stolen in 1970 and never recovered.

In the 1990s, a large restoration effort was undertaken by the Rogers County Historical Society, in concert with the Kansas Grass Roots Art Association and the Foyil Heritage Association. The outdoor sculptures were restored and repainted, and the Fiddle House was brought back from the brink of collapse.

Ed’s sculptures were looking sharp in 2003, apparently enjoying regular maintenance by the preservationists. Totem Pole Park is a quiet sloping expanse of lawn, with stands of trees and concrete picnic tables.