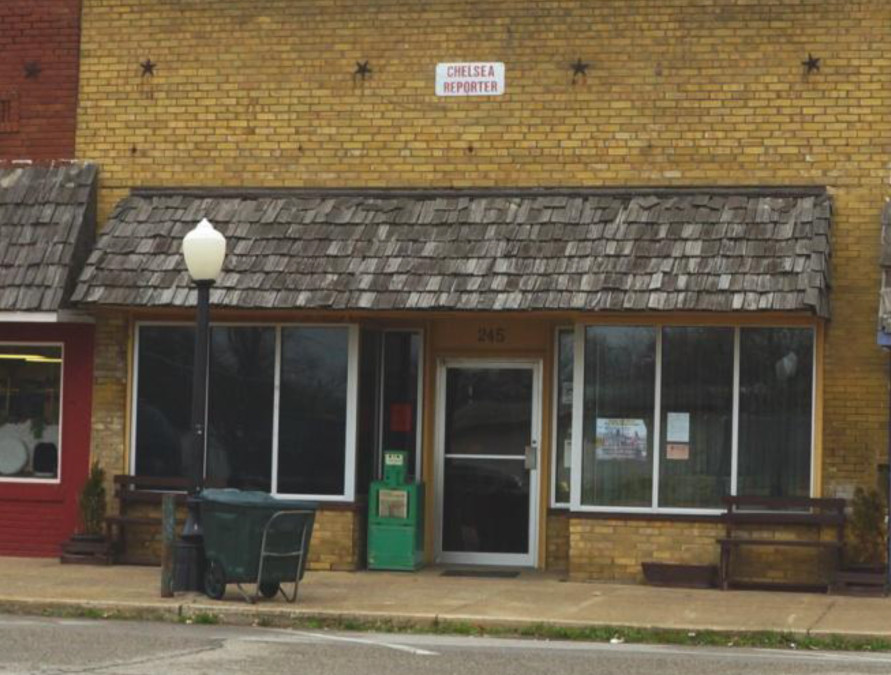 The Reporter, established in 1896 by J. A. Clawson is one of the oldest newspapers in Oklahoma and is thought to be the oldest ongoing business in Chelsea. Among some of the earliest information available, we find in the year 1899 the Reporter was published on Thursdays. Publisher was D. G. Elliott and H. H. Carlin was the editor. In 1900 J. W. Quinn had leased the paper and changed it from an eight column to a five column paper. It was at this time all being printed in Chelsea. During the latter part of March 1901, Clawson sold the Reporter to A. R. and R. E. Miller. At that time the paper was changed to a seven column publication. The date of publication was also changed from Thursday to Saturday. In November 1901 the publication date was advanced a day making Friday as the date of publication. The next records are in July 1906, when B. H. Hester bought in with M. Roberts and some time before November of the same year Roberts left. In November 1906, Ira D. Divine bought an interest in the paper. The next records are in 1913 when the Reporter was under the management of F. L. Dale. Then in 1917 Sam R. Ogg came from the Daily Register, Siloam Springs, Arkansas and went in with Hester as business manager. In 1923 the paper changed hands again. This time L. W. Evans was owner and manager of the plant and it remained under his guiding hands until December, 1927, when Rev. J. A. Trickey and sons, LeRoy and Bill took ownership. It was in the late 1930’s that the A. J. Herring family moved to Chelsea from Muskogee and purchased the Reporter. Upon the death of his father, Robert Herring took over the newspaper and continued at its helm until his death in 2004. It was his desire that the town continue to have a paper, so he entrusted its continued operation in the hands of long time employee, Linda Lord, who had started to work at the paper in November of 1984. Linda and her husband, John, continue to operate the paper today and it is their desire that The Chelsea Reporter remains a locally owned and operated ‘country weekly’ geared to serving the needs of a small rural community and the surrounding area.